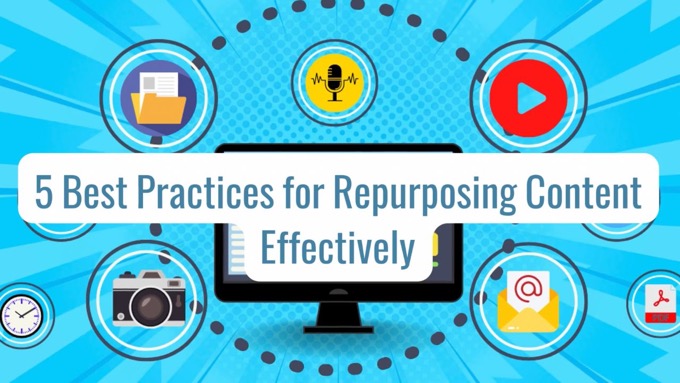 Without repurposing, you’re leaving much of the value of the content you create still on the table.

Repurposing allows you to appear in front of new audiences across multiple platforms, with relatively minimal effort. You’re simply adapting content you already have into new forms.

Repurposing allows you to appear in front of new audiences across multiple platforms with relatively minimal effort.Click To Tweet

So how can you ensure your repurposing is as effective (and efficient) as possible?

4. Don’t Do It All Yourself

Probably the most important best practice for repurposing content is to do so consistently.

You have to keep showing up.

Most of the repurposing advice out there suggests occasionally picking one of your top performing pieces of content, repurposing that into different forms, and effectively ignoring everything else.

That’s only suggested because they’re not approaching it systematically, which up to now has not been a practical possibility (see #5 below).

So sporadic repurposing was left as the only option, sucking up the dregs of already overstretched content marketing teams or further exhausting solopreneurs trying to tackle it all on their own.

What is probably the most important best practice when repurposing content? Doing so consistently. You have to keep showing up.Click To Tweet

But on nearly every platform you repurpose content to, you don’t build audiences and long-term success by showing up every now and then.

In fact, let’s be honest. Approaching it sporadically is largely a waste of time and effort.

So why is it any different just because you’re repurposing something?

So above all, be consistent.

This relates to written content you have on your blog.

Yes, it might be easier to just do a quick copy and paste and stick the same content somewhere else.

But here’s the problem.

Let’s say you put it straight onto Medium, as is. And then Google comes along, decides to treat the Medium content as most authoritative, and prioritizes it in the search results.

That means the same content on your own blog effectively disappears from view.

(You can specify the canonical URL, but Google doesn’t always respect it).

It’s best practice to have your own blog’s content listed separately, as:

In addition, by having your original blog post and a rewritten version of the content elsewhere, you’re effectively doubling up on your search presence.

And it’s far easier to get an additional search listing by repurposing something via a simple rewrite, than starting a new piece of content from scratch.

Even though you have the original content to work from, it still takes time (and potentially other resources) to repurpose it into a different form.

So to be as efficient as possible and extract maximum leverage from that content, best practice would be to repurpose it into a form that can be reused in multiple ways or multiple places.

Here are some examples of some hyper-efficient forms of repurposed content.

Video can of course be shared on YouTube, potentially Vimeo too, as well as uploaded and shared natively across multiple social platforms.

If the video has been created as a piece of content repurposed from a blog post, once on YouTube it can also be embedded back into that originating blog post, and maybe other posts too.

Doing so helps your SEO — in other words, helps such posts attract additional traffic from search — because:

Doing so also helps to attract subscribers to your YouTube channel, building your YouTube audience for longer term benefits.

When repurposing content, be as efficient as possible by repurposing it into forms you can use in multiple ways and multiple places.Click To Tweet

If you’re an Instagram user, you’ve likely seen the carousel format, with multiple swipeable images within a single post.

In fact, it’s one of the most engaging formats on that platform.

The good news is that such images can be used elsewhere too, such as: 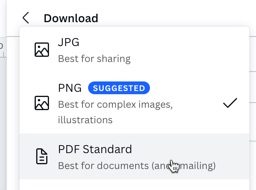 Creating an article of say 1,000 to 1,500 words, whether rewritten from an original blog post or repurposed from say a video or podcast, can then be used across multiple websites, including:

Remember, if repurposing from an original blog post, rewriting the content ensures the original post stays unique and remains listed on Google, while potentially doubling (or more) your search engine visibility thanks to the rewritten version.

Repurposing an original piece of content into a short written summary (say, 120-150 words) takes just a few minutes to do, and can then be used in a surprising number of ways, including:

4. Don’t Do It All Yourself

If you’re a solopreneur or operating as a solo content marketing “team”, the biggest obstacle you’ll come up against when trying to repurpose content effectively is trying to do it all yourself.

This approach is simply never effective, because you won’t be able to achieve the consistency required (see #1 above).

Inevitably, something else that appears more pressing will come up, priorities will shift, and you may just simply not have the inclination to take care of the repurposing work that’s needed.

After all, as soon as you click publish on one piece of content, there’s that next one staring at you on the content calendar with a brand new deadline.

Unfortunately, taking care of the next piece of content rather than maximizing the value of the one just published, means ignoring up to 80% of its inherent value.

So, do yourself a favor.

Stop relying on yourself to take care of the repurposing side of things, or kidding yourself that one day you’ll get on top of it.

The biggest obstacle that will stop you from repurposing content effectively is trying to do it all yourself. Instead, hire others, and systematize your processes.Click To Tweet

Instead, as soon as you hit publish, you should be able to rest easy, knowing that one or more other people are taking care of the repurposing, which you can then just monitor.

After all, much of it can be outsourced incredibly cheaply.

It’s really all about getting the right system in place so that it can, well, just happen.

Doing so will revolutionize your whole approach to repurposing content, and therefore the results you achieve from it as well.

Using a system doesn’t mean you have to rush in and have everything systematized right from the start.

Just start with one way you’re going to repurpose your content, and build up from there.

See the following for starters:

However, the system you use needs to be scalable.

Sure, if you’re only repurposing it one way, then you could probably get away with a spreadsheet, and try and keep track of it that way.

But start adding more ways to repurpose, and it gets messy very quickly, becomes unmanageable, everything falls apart, and then you’re back to square one (trust me, I’ve tried!)

Instead, best practice is to use something built for purpose, and that means using the appropriate software.

Trafficonomy is specifically built to help with organic content marketing. It means appropriate tasks such as for repurposing can be assigned and then monitored as needed as soon as you publish something.

It’s also completely scalable, which means over time you can make your repurposing (and any other post-publication, promotional) activities as extensive as you need.

This post has explored five best practices for repurposing content effectively, including ways to maximize the results you achieve from doing so while avoiding additional personal workload.

Out of all of them, the practice that’s going to have the single biggest impact on your results is to systematize your whole approach, making it both scalable while helping you achieve the consistency needed to achieve long-term success from repurposing. 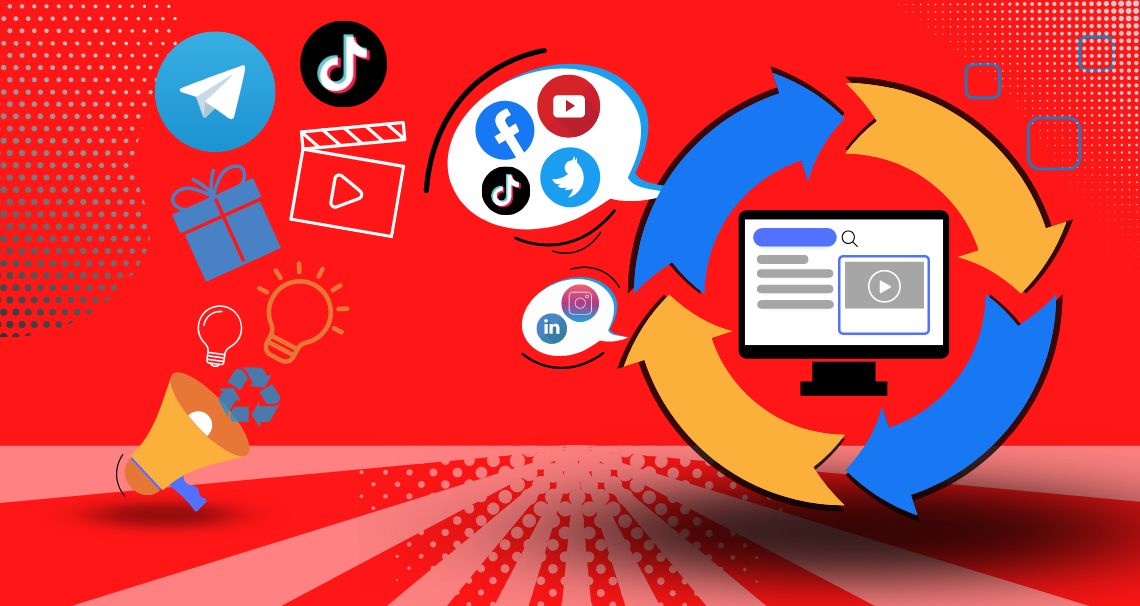 What does content repurposing actually look like in practice? Here are 8 real life content repurposing examples sourced from across the web, including text-based, visual and audio content to both inform and inspire. By repurposing content you’ve already got, it’s far easier and quicker to grow online visibility and… 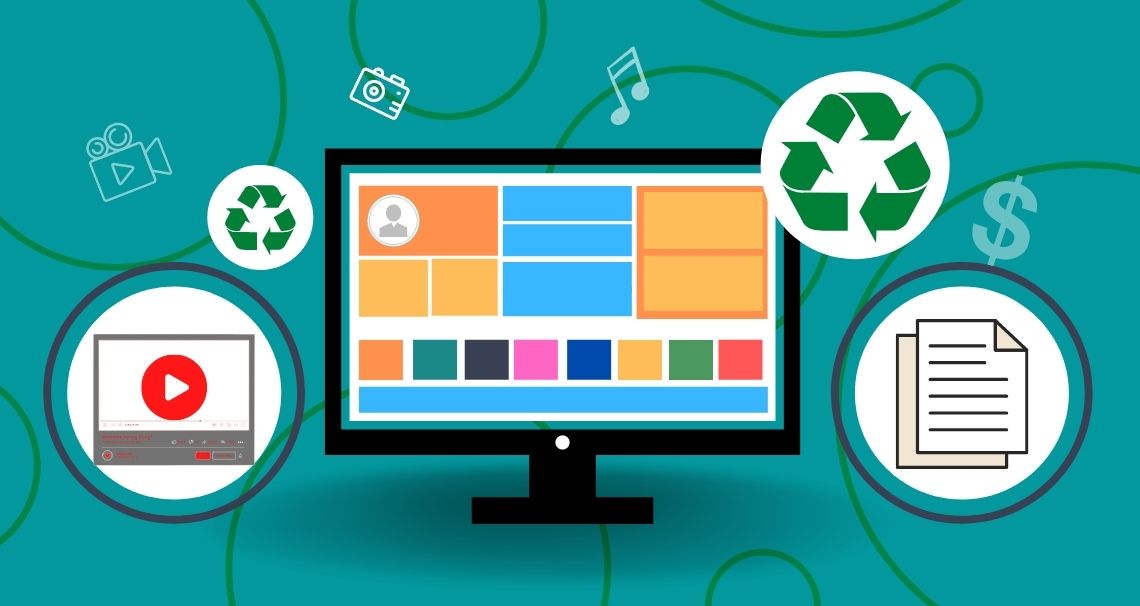 Nine out of ten marketers find repurposing content more effective than creating brand new content. That includes benefits for SEO. But how does it work when it comes to repurposing content for SEO? This post gives you 12 tips to repurpose content to grow your visibility on search engines and attract more traffic back to your website…